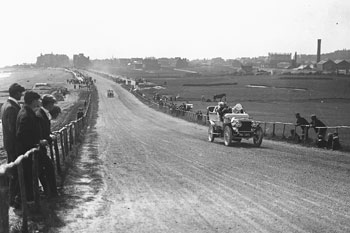 "The very atmosphere reeked with the smell of paraffin. No cabs or horses to be seen; only throbbing, puffing and snorting motors everywhere. Wild-looking individuals in strange garb - some of which would frighten a Red Indian out of his skin - had taken possession of the hotel and boarding houses. Nothing talked about only horse power, kilometres, exhaust boxes, sparking plugs and such like paraphernalia - and such languages, it was like the Tower of Babel let loose. One had hardly got off to sleep on Sunday night before the clatter and banging of these weird creations had commenced once again. No use trying to sleep, one had to get up and see the fun.

Away up Galley Hill at the far end of the course one could see a puff of smoke and a fair-sized speck emerge from it; a few seconds, and lo! A monster dashes past, causing the very earth to tremble. Mud, mud everywhere splashes from the wheels right up the windows of the boarding houses; of the drivers of the distance annihilators nothing could be seen except a crouching figure with streaming hair, whose hands had a death-like grip of the steering wheel. The life insurance premium of these men must come fairly high, for there seems to be very little between them and the next world. Yes, it was a strange and uncanny sight to see the flying boxes of machinery dash past at 60 miles an hour". (These impressions of the "Man in the Street" may be very real at present, but that individual has to get used to the motor car - ED.)